Note: Boney Island in the middle of the Rock River is part of Nature At The Confluence Campus. There has been an eagle nest on this island for at least 11 years. Kurt Van Galder is an accomplished wildlife photographer who spends quite a bit of time photographing this nest. Kurt is scheduled to have a free program “Soaring With Eagles” featuring his photography adventures on Tuesday, May 19, 6:30pm.

This article was written by Hillary Gavin and was published in the Beloit Daily News, April 15, 2020 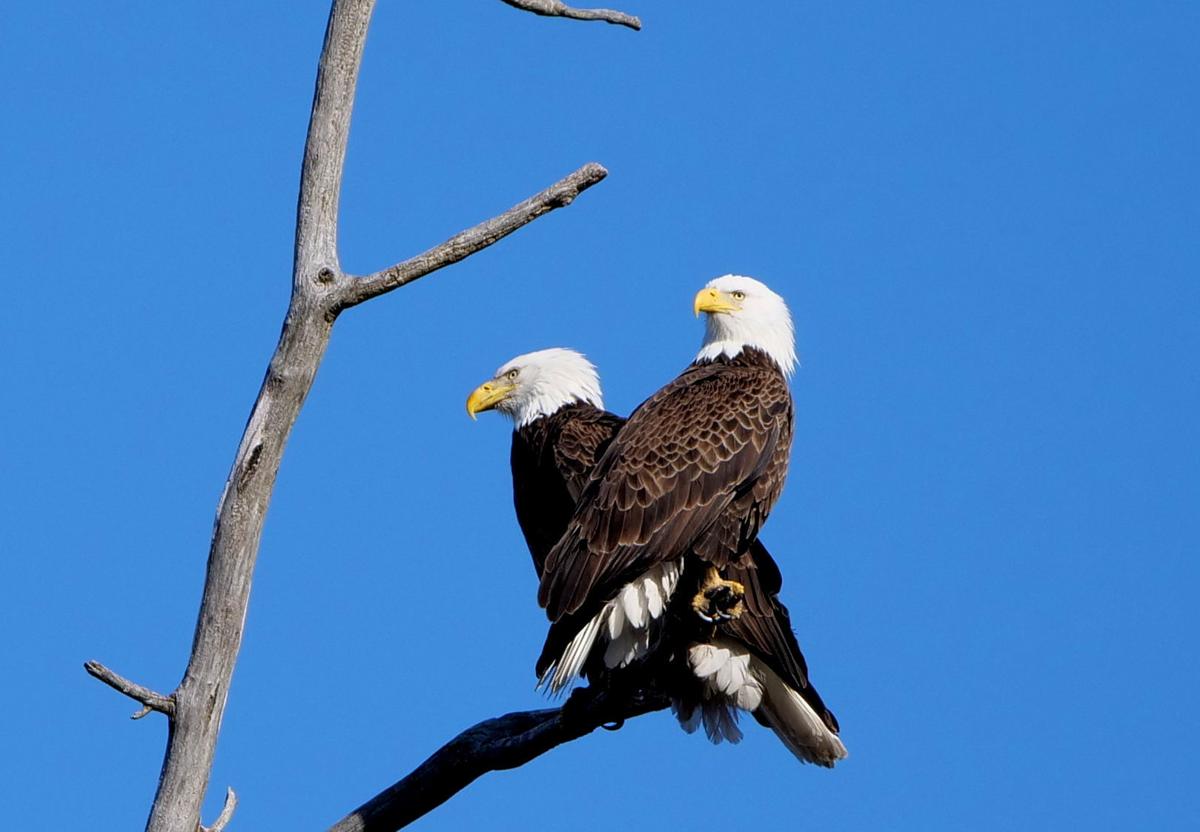 Photographer Kurt Van Galder has been following the pair of eagles nested in a towering tree near Nature at the Confluence, 206 Dickop St. They are visible from the area of Viking Lanes and Axium Foods in South Beloit. On April 10 or Good Friday, Van Galder captured mom and dad eagle “snuggling” in the nest before hopping over to spend the time in the “sweetheart tree” where they could protect the nest from potential predators such as pelicans, blue heron and turkey vultures.

Van Galder has been tracking the nest at Boney Island for the past 11 years. The nesting pair of eagles usually rear two to three eaglets each year. They eat primarily fish, but they may dine on duck, geese, rabbits, gophers and turtles in the area.

Van Galder usually spots the South Beloit pair starting in February. By April 2 this year, he watched them haul in branches and long grasses to build up the nest. Mom and dad were taking turns sitting on the nest and were rolling the eggs every hour. They then took off to their “sweetheart tree,” 20 yards from the nest to keep watch.

After his recent Good Friday visit, Van Galder said he will be returning to watch them on Thursday when the weather is warmer. He estimates that the eaglets should be visible in about two weeks, or in early May when they get sturdy enough to sit up and tall enough to see out of the nest.

“They are the fastest growing bird in North America. They will put on four to five ounces each day,” Van Galder said.

By June, they likely will be taking a short prelude to flight, hopping up to catch wind, flap their wings and get briefly airborne above the nest. Shortly thereafter they will attempt to leave the nest.

“Seventy days after they hatch they will take their first flight,” he said.

Once they begin flying and making their first trips this summer many Beloiters will see them on trees behind Bluff Street by the Beloit Post Office.

In August, the little ones will venture out on their own for good. They may fly up to Alaska or the Arctic Circle and later come down to Wisconsin in winter. If they try to return back to their South Beloit nest, they won’t be welcomed back.

“Little ones will sometimes come back a year later, but get kicked out of the nest,” Van Galder said.

Van Galder has been taken with eagles since he was a child. Today he travels to spots such as Decorah, Iowa; and Sauk City and Prairie du Sac in Wisconsin to watch nests.

During the winter, he explained, the northern lakes freeze and eagles in Southern Canada and northern Wisconsin will migrate and find open waters south of their home base although not as far as Mexico.

With more than 7,000 feathers on each bird, Van Galder said they only need to move far enough to hit open waters with fish.

Van Galder has many tales about the rambunctious birds he’s spotted around the state. Van Galder has captured photos of them eating fish mid-flight or locking talons with fellow eagles as they battle for fish. One time he saw an eaglet kick a sibling out of the nest who didn’t want to attempt its first flight.