IN SOME WAYS it seems like eons ago. In others, just days.

In 1990 I joined a small group of folks who boarded a bus in Beloit and took a trip to Naperville, Ill. The objective was to look over what that city had done with a “riverwalk,” intended to be a centerpiece in animating and improving quality of life in their central city. The idea was to see first-hand what it looked like while considering whether Beloit had what it takes to accomplish something similar.
At the time there were plenty of skeptics, who looked around at Beloit and saw a community in unstoppable decline. How could a city beset by all the problems facing Beloit even consider taking on a bold new vision for rebuilding not just infrastructure and amenities, but even more so the confidence and morale of its citizens?

WELL. In 2013 most of that vision — and a whole lot more — has been realized. Now visitors come to Beloit to see our riverwalk and wonder if they can do something like it back home. The City Center of Beloit has been reborn in ways most communities would envy. And it’s not just that Beloit beautified key areas, creating pretty public places. No, while that may have been a catalyst the effort encouraged tens of millions of dollars in private investment. There are big projects — the ABC Supply Co. overlooking the riverfront; Beloit College’s great science center; the Beloit Inn; Ace Hardware; Regal; Heritage View; redevelopment of the Iron Works; the Phoenix Building, and others. 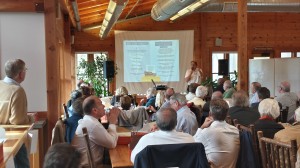 There also are many smaller projects, filling storefronts and drawing people to the central business district to shop, eat out and generally have fun. It’s an incredible turnaround and a great story to tell. Folks who may have left Beloit a quarter century ago and now return scarcely recognize the place.
WHETHER IT’S A community, a business, a ball club or an individual, though, resting on one’s laurels is the surest path to decline. If a community is not going forward, it will inevitably start sliding backward.
So, another bus ride.

Beloit College Professor Jeff Adams, who has been instrumental in developing the vision of a reborn Beloit throughout this time, asked me and several others to hop on a bus again, this time for a trip to Milwaukee. The reason: To see how the Urban Ecology Center has been reclaiming blighted natural areas and turning them into community gems that encourage and multiply improvements.
The tie-in is what might be learned that could be helpful as Beloit and South Beloit examine options to open up the historic “Confluence” land for public use and enjoyment.

OK, I KNOW some of you are saying, “Confluence?” What’s that? Simply put, it’s why we are here. Close your eyes. In your mind, erase all the buildings and roads and light poles and all the other signs of modern life. Oh, yes, erase the people, too. What was here before any of that was the joining of two significant waterways, known today as the Rock River and Turtle Creek. The Confluence.

Native Americans occupied the site long before Europeans “discovered” the continent and began working their way west. The Confluence was a source of life-sustaining water and, just as important, part of a pathway through the wilderness. When settlers arrived, looking for land and water and the ingredients to build a community, the Confluence provided an hospitable environment. Open your eyes again. Without the Confluence, it’s very possible there would be no community here, today, on the Wisconsin-Illinois state line.  Really. It’s that important to our history.

THERE’S AN interesting exercise you might try. Today, ask a few friends and family members if they’ve ever seen the actual spot where the Turtle flows into the Rock River. Longtime resident or newcomer, the likely answer will be, “nope.” That’s not because of any innate lack of curiosity. Truth be told, you can’t get there from here. Back in 1990 it was noted that Beloit, like most communities, over the years had turned its backside on the most important natural element and resource — the river. Early on, heavy industries backed up to waterways to provide power and a means to transport goods. Over years — especially the Rust Belt years — many industries declined and river corridors became blighted, vacant eyesores, blocking access to the shores. These areas looked old and rundown and uninviting. Some of that occurred in areas near the Confluence, and it also suffered from being in a floodplain. The result is an area unused, overgrown, neglected and largely unknown.

THERE’S A PLAN in the works that could change that, to open the Confluence and make it an inviting and accessible place where families can recreate, learn some history and ecology, continuing across the border the kind of game-changing improvements reflected in the City Center. Greater Beloit isn’t necessarily looking to mimic the successes of the Urban Ecology Center in Milwaukee, but it was a good place to start reflecting on the process. The UEC began small in the 1990s, basically with neighbors and interested persons who wanted to reclaim nearby Riverside Park which had fallen into neglect, becoming a haven for crime and drug use. Their efforts included not only organized park cleanup, but learning programs to reanimate the parkland and especially to involve schools and children in ecological and science-related projects. Invasive plant species were cleared, replaced by appropriate plantings. Gradually, improvements took root and an eyesore became a community treasure. The effort helped grow pride and spark renewal efforts in the neighborhood, resulting in new investment and extensive beautification. The involvement of students and schools accelerated, with UEC nature programs being credited with higher academic scores and even lower crime. The connection to school kids is key, because it introduces a new generation to the concept of taking responsibility for their surroundings. Over time, that may well prove to be the most important accomplishment of the UEC’s projects. 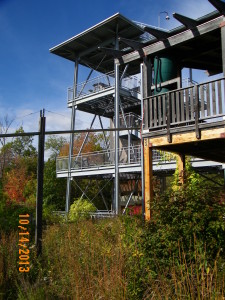 THE MILWAUKEE Center has grown and moved into other neighborhoods as well, most notably the Three Bridges Park area of the Menomonee Valley. There, UEC-coordinated work is reclaiming the blighted area and helping to create a walking/biking greenway complete with newly landscaped and groomed land along the river corridor. As with the Riverside Park site, the UEC involvement doesn’t begin and end with prettying things up. The Center has rehabilitated a building to house its work in the neighborhood — being physically part of the neighborhood matters to them (and it matters to the neighbors) — again reaching out to include residents and schools and students in its projects. The community connection is what energizes the projects, both for today and tomorrow. Let’s pause to give readers an interesting sidelight to our day in Milwaukee. Ken Leinbach, UEC’s executive director, spoke to the group and gave us a terrific overview of the history and goals of the Center.
But we were all particularly taken by his sidekick, UEC Senior Land Steward Kim Forbeck. She’s a Beloiter. Her dad is Rock County Circuit Judge Ken Forbeck. Her mom — and Kim’s resemblance to her mom is stunning — is Helen Forbeck, former Beloit City Council member and longtime assistant to the late Congressman Les Aspin and also to Tammy Baldwin when she represented the Beloit area in Washington. Kim was our tour guide, and demonstrated a broad understanding and expertise of what it takes to make an organization like the UEC successful. Her passion for the project is strikingly evident. She’s a Beloiter making a difference.

SO, IS BELOIT looking to replicate the Urban Ecology Center approach at the Confluence? Not necessarily. Maybe, though, to some degree. The plans are not complete. For now, supporters including the Beloit 2020 group — known as Beloit 2000 back in the day when we bused to Naperville, Ill. — are just looking at plans to make the Confluence an accessible and welcoming part of the community, as it should be. Dwight Kruse, Beloit 2020 president, said the aim is to renew and reinvent the corridor similar to what transpired in Beloit with the Riverfront Project and associated efforts. “We’ve got a track record now, so we may not have to sell it quite as hard as we did in 1989,” Kruse said. He points out that when many people visit the community they route through South Beloit along Gardner Street and Blackhawk Boulevard into Beloit. “That should be our front door,” he said, “and it doesn’t look very good right now.” The Confluence plan, he believes, can become a key component for improving not only the approach through the community, but the surrounding neighborhood as well. That was the case with improvements in Beloit, which leveraged big investments by private interests as the years went by.

PROFESSOR ADAMS calls the Confluence “an enormous asset.” He adds, “there are eagles here, there are herons here.” Too bad nobody can see them.  By extending the City Center vision to the Confluence, and developing a plan to reclaim the area and make it accessible, the geographic point where it all began once again can become a point of pride. Adams says it will take a creative and visionary plan, local-state-federal partnerships, the support of the private sector, the nonprofit segment and, of course, the people of the Stateline community. To reshape the land, create adventure programming and animate the site with families enjoying themselves will not happen overnight. And it won’t be cheap.

But it will be worth it.

William R. Barth is the Editor of the Beloit Daily News.
http://www.beloitdailynews.com/opinion/editorial-community-considers-access-programs-where-turtle-creek-meets-the/article_057e7dd2-4372-11e3-a3d4-001a4bcf887a.html