Environment Art at The Confluence by Beloit College Students

It’s not the type of art you would expect from a Beloit College art class, but it’s important all the same.

Students in Beloit College Art Professor Jo Ortel’s class “Contemporary Art in an Age of Global Warming” have taken most of this semester developing an environmental art project for the South Beloit Confluence Area. The City of South Beloit has developed plans to renovate the area where the Turtle Creek empties into the Rock River in a way that focuses on the history and nature of the confluence. 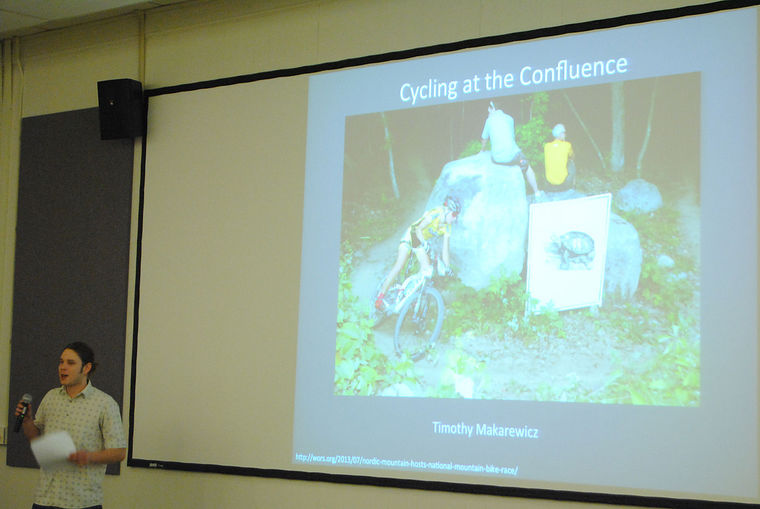 Guest lecturers came to the class to discuss the project and the history behind the confluence area. Students had to design an environmental art project. Ortel said the goal of the project was to determine what role art can play in solving climate change challenges and to help raise awareness of environmental issues.

“The artwork you will see may seem somewhat unexpected,” Ortel said. “It’s not what you would expect to see in terms of art from this class.”

Students presented their ideas this week to the class, as well as several outside evaluators, and received feedback on the art projects.

Phillip Amsden and Erik Enderlien focused their project on soil remediation in the confluence area. The two focused on a smaller region right around where the Turtle Creek empties into the Rock River in South Beloit.

“That particular area has been damaged by industrial waste dumping and pollution, and our project involves remediating the soil in that area,” Amsden said. “And to make it viable for plant life as well as recreational use.”

Amsden said rivers had always been a source of life for humans in the past, and were one of the reasons humans were able to settle down and begin to industrialize. Today waste has been dumped and ecosystems have been killed in rivers throughout the country.

“What we want to stress in this project is a return to this relationship between humans, soil and rivers so that we can begin to enjoy again this mutually beneficial relationship,” he said.

Enderlien said soil toxicity seen in the confluence area poses a health risk to all plant life, wild animals and even humans who come into contact with the soil. He said the industrial fill — meaning soil that isn’t naturally found at the site — goes between 6 and 8 feet. Gasoline samples were also found on the site as deep as eight feet.

The pair proposed a process called phytoremediation, which uses different types of plants to remediate the soil. Amsden said plants such as common ragweed, sunflowers and even hemp and cannabis, can be used to draw out different toxins from the soil.

The plants and leaves would need to be harvested in an environmentally friendly way in order to prevent them from dying and replanting into the soil. Enderlien said it could take a couple of years for the soil to be fully remediated, and it depends on the level of toxicity and the types of toxins in the soil.

The group’s plan includes planting Magnolia trees in concentric circles, and offering visitors a chance to write their wishes on a piece of fabric that could then be hung on one of the tree branches. Newman said the idea is similar to Yoko Ono’s “Wish Tree,” which involved people tying their wishes for peace to the branches. Newman said Ono encouraged others to replicate the project in their communities.

“I think we can all agree that we all want to live comfortable lives free from fear and violence,” Rawlinson said. “In light of recent violence in Beloit and the world at large, we aim to transform the space at the confluence into a safe refuge, that promotes individual growth, and fosters empathy and connection between others.”

Senior Timothy Makarewicz chose a mountain bike path as his project. He said he worked at a bike shop throughout high school, and noticed there aren’t very many mountain bike trails designated in the Beloit area. He said the trail could be used for both biking and hiking, and the confluence area provided enough room for a small beginner course.

“It’s a unique opportunity due to the site’s proximity to the downtown area,” he said. “The irony in mountain bike riding is that riders have to drive two hours to ride for an hour, and then drive home two hours.”

Markarewicz said the trail at the confluence site could easily be connected to other potential mountain bike trails at Big Hill Park and around Beloit.

Ortel said while the students don’t expect their ideas to be fully implemented they have become very knowledgeable about the confluence site and what attractions might help bring more residents to the area.