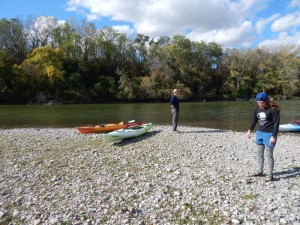 On Boney Island on the Rock River near the Confluence in South Beloit. Photo by Therese Oldenburg

Before there were roads.

Before there were settlements.

Even before there were people.

There was the confluence — the place where Turtle Creek meets the Rock River.

In many ways, the confluence is why both Beloit and South Beloit are here today. And, before European settlers arrived, it’s why the site was home for generations of Native Americans.

The waterways served as highways through the wilderness, provided a reliable source of fresh water, and attracted abundant game. It was a gathering place engineered by nature itself.

A joint initiative by the City of South Beloit and the Beloit 2020 civic development group proposes to build on that theme by creating “Nature At The Confluence,” an environmental learning center on the property just across the state border. A community informational open house will be held Thursday to provide details to citizens.

A public open house is planned for 4-6 p.m. at The Sand Castle, 201 S. 8th St. in South Beloit, to view displays of the proposed plan. Then, at 6:30 p.m., a public presentation will follow expanding on the initiative with details of proposed development.

Additionally, organizers are planning a clean-up effort from 8-10 a.m. on Saturday at the confluence site. Volunteers are asked to help with light pick up of litter. Interested individuals are asked to meet behind the Dahlman Muffler shop at 301 Dickop St. Volunteers are urged to bring heavy gloves. Organizers say there will be no heavy lifting.

The area identified largely is inaccessible today, lying west of Blackhawk Boulevard and east of the Rock River. Decades of non-use and neglect have created an area that is overgrown, without amenities and lacking much to draw people to the historic site.

Organizers of “Nature at the Confluence” hope to not only clean up the area, but bring a number of amenities to reality, transforming the site into an environmental learning center. Last year, organizers took a busload of Stateline Area leaders to Milwaukee to visit the Urban Ecology Center, which is credited not only with restoring blighted natural areas, but also has become a key partner in environmental education efforts.

“Nature at the Confluence” plans include construction of a learning center to interact with schools, scouts and other groups in the Stateline Area. Plans also call for gardens, an outdoor courtyard/classroom, hiking trails and much more.