Local wildlife photographer Kurt Van Galder who spends quite a lot of time watching and photographing the Boney Island eagle nest has concerns about the tree the eagle nest is in. It is built in a dead cottonwood tree and you’ll see in the photos that it lost one of the big supporting branches in the past months, but thankfully the break occurred where the branch can still support the heavy nest. It looks solid enough to last through this year, but a strong storm could possibly damage the tree more. In July of 2012 winds blew down the nest with 2 eaglets that were almost ready to fledge (leave the nest). The blow down was captured by Patsy, a local resident – see the dramatic video below. A rescue mission was launched by Northern Illinois Raptor Rehab & Education volunteers on the same day. They were able to locate one female and rescue her. She was kept at their rescue for 3 weeks, then release in the same area. The other eaglet was spotted by the public, and because it was ready to fly, it survived with the help of the parents. After the release of the female, the whole family was seen together.  The adult couple rebuilt the nest in a different tree on the island the next season and have continued to add on to it. This is the cottonwood tree they have been using for the past 8 breeding seasons. 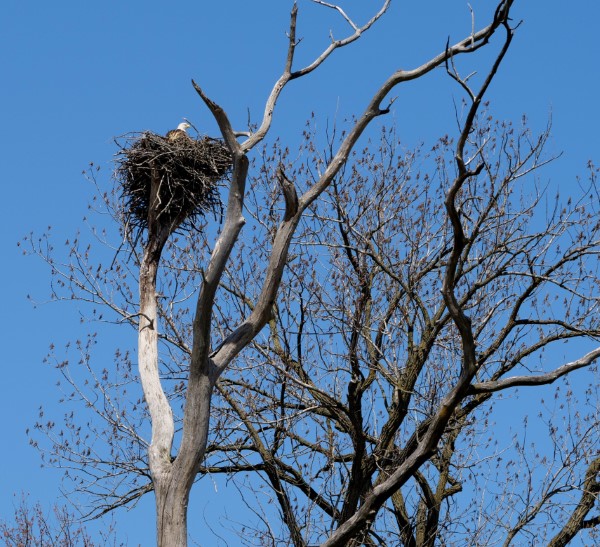 A bald eagle nest is the largest nest of any North American bird, and can be up to 13 feet deep, 8.2 feet wide, and up to 1 ton in weight. While not that large, the Boney Island nest on the east edge of Boney Island in the middle of the Rock River is a classic example of an eagle nest and here is why:

The video below was captured in July 2012 of the Boney Island eagles when the nest blew down with two eaglets in it.