It may be buried, but history still lives here at the confluence 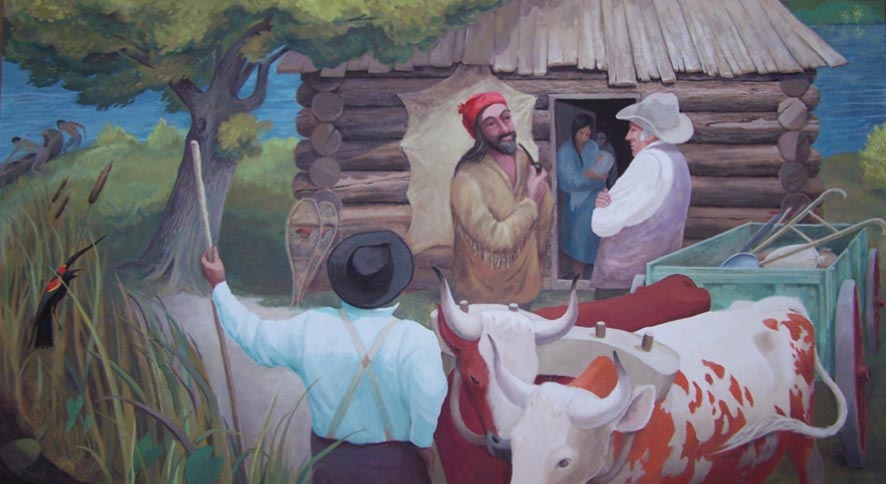 “Thibault’s Cabin: The Founding of Beloit” by Frank Boggs, Commissioned by Peter Maiken

While the documented history of the land at the confluence of Turtle Creek and the Rock River helps us to understand the historical significance of this location, any solid evidence of the first settlers is buried under layers of foundry fill, silt and other debris. As we bring this land back to life through the Nature At The Confluence project, we will keep alive the history and sacrifices of the native peoples, the French fur traders, the European settlers, and all those who followed them to settle this land.

Around 1830, a large Ho-Chunk village known as Ke-Chunk (Turtle Village) existed near the mouth of Turtle Creek close to the Illinois-Wisconsin state line in what is now Beloit, Wisconsin and South Beloit, Illinois. According to Beloit College Professor Dr. Bill Green, “In the late 1820s and early 1830s, Ke-chunk was one of the major villages of the Ho-Chunk (Winnebago) people. The word Ke-chunk (properly Kečąk), means “turtle” and was used to denote the Ho-Chunk village on Turtle Creek In 1829, according to U.S. Indian agent John Kinzie, this village had 35 lodges with nearly 700 inhabitants. Notable Ho-Chunk leaders associated with the village include White Crow (Kau-ree-kau-say-kaw), Whirling Thunder (Wau-kaun-wee-kaw), Walking Turtle (Karramaunee), and Little Priest or Little Chief (Mor-ay-tshay-kaw). The early French-Canadian trader Joseph Thibault built a cabin near the village site in 1835 or perhaps earlier.”

Dr. Green conducted archaeological research at The Confluence in the summer of 2012. He concluded in his report “The Search for Ke-Chunk – 2012 Investigations in South Beloit, Winnebago County, Illinois” that  “no early 19th-century features or material were found. Although no remnants of Turtle Village were discovered, the site may exist nearby and additional survey and testing are recommended elsewhere in the vicinity.”

Who Was Joseph Thibault?

The image above is a photo of a painting that is historical reproduction of a meeting between Joseph Thibault (Tebo) and Caleb Blodgett who is credited with being the founder of Beloit. Thibault was a fur trader who “acquired” land from the Native American’s from the Ho-Chunk nation which had a major village (Turtle Village) at the confluence of the Turtle Creek and Rock River. In 1836 Caleb Blodgett arrived in the area looking for a desirable piece of land in which to start a saw mill and a new settlement. He met Joseph Thibault and offered to buy his claim of “three looks” of land.  Thibault sold three “looks” of land to Blodgett who, in turn, sold 1/3 of the land to the New England Emigrating Company who platted and settled Beloit. The location pictured in the painting is at the confluence of the Rock River and Turtle Creek is in South Beloit. Thibault’s cabin probably was in South Beloit but it is usually claimed to be located just north of the Stateline.