Kečąk: We Once Lived Here | The Ho-Chunk At Ke-Chunk Village 2019 Learning Series 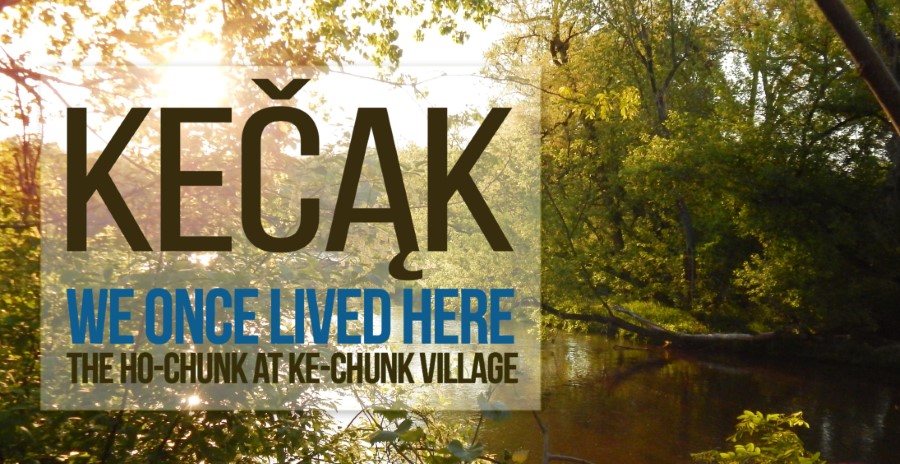 At the confluence of Turtle Creek and the Rock River there once was a very large Ho-Chunk (Winnebago) settlement called Ke-Chunk (Kečąk) or Turtle Village. The Ho-Chunk lived all along Turtle Creek until 1832. “We Once Lived Here: The Ho-Chunk at Ke-Chunk Village” series features a variety of programs held throughout the year at Nature At The Confluence that highlights the culture and heritage of historic and contemporary Native American Indians.

Kečąk: We Once Lived Here | The Ho-Chunk At Ke-Chunk Village Learning Series

Who Once Lived Here? |  Ke-Chunk Village At The Confluence – Offered on  August 11, September  7 at 1 p.m.. At the confluence of Turtle Creek and the Rock River there once was a very large Ho-Chunk (Winnebago) settlement called Ke-Chunk. Come learn what we know about Turtle Village and why people called this area home. We’ll start indoors with a visual presentation, and then walk the confluence property to learn more (less than quarter mile). Presented by Therese Oldenburg, Executive Director, Nature At The Confluence.  $5 suggested donation. Program for all ages. Learn more.

Nature Kids: What Did the Ho-Chunk Grow? Saturday, August 17, 10:00 a.m. – Kids will learn about the crops grew by the Ho-Chunk Native Americans at Ke-Chunk Village,  and find out where they had their garden beds along Turtle Creek. How did they prepare and store their food for the winter? They’ll see what is growing in the Native American Heritage Garden. Free program for ages 7-11.* Learn more.

Nature Kids: Who Lived In These Woods?  Saturday, September 7, 10:00 a.m. – Kids will learn who has made the confluence area at Turtle Creek and the Rock River home over the last 200 years, both humans and animals. We’ll try to find answers to the questions: Why did they live here? What did they live in? After learning about the traditional Ho-Chunk dwellings called “Ciporoke” (chee-poe-doe-kay) used at Ke-Chunk Village, we’ll build a scale model together. Free program for ages 7-11.* Learn more.

A Peek Into The American Indian Way of Life: In Celebration of Indigenous Peoples Day, Sunday, October 13, 1:00 p.m.   Kim Sigafus, an Ojibwa author and speaker, will invite people into the world of the American Indian to discover what it once was to be Native, and what it means to be Native now.  Kim will be dressed in her traditional Native regalia, and will present on Native culture through oral traditions, language, and history. She will discuss Native encampment life and will drum and sing an Ojibwa lullaby. Kim’s family is from White Earth Reservation in Minnesota and her Ojibwa name, Bekaadiziikwe, means “Quiet Woman.” Kim is an Illinois Humanities Road Scholar and this program is supported by the Illinois Humanities Road Scholar program. Free program for all ages.

Nature Kids: Migration Through the Seasons: In Celebration of National American Indian Heritage Month, Saturday, November 2, 1:00 p.m. – Why do animals and people migrate? You’ll learn about where wildlife goes when it becomes cold, as well as where the Ho-Chunk people who once lived at Ke-Chunk (Kečąk) Village migrated to in the fall and winter.  Free program for ages 7-11 * Learn more.

* Nature Kids programs are offered at no cost to the public through a grant from Col. Robert H.Morse Foundation.

In addition to these special programs, visitors can walk Nature At The Confluence Campus to learn more about the Ho-Chunk culture in the following exhibits.

Ke-Chunk Village Interpretive Sign: A new interpretive sign that tells the story of the people that made the Confluence area home before 1832 will be installed in 2019. This sign is funded by a grant from Visit Beloit.

Ho-Chunk Sculpture Project Display: Inside the learning center you can learn about a proposed sculpture project at Nature At The Confluence by Truman Lowe, a nationally acclaimed artist and member of the Wisconsin Ho-Chunk Nation. It would be an outdoor sculpture inspired by traditional dwellings called “Ciporoke” (chee-poe-doe-kay) found at Ke-Chunk, a Winnebago Ho-Chunk village which existed ca. 1830 along Turtle Creek. This work of contemporary art would honor the Ho-Chunk Native Americans who once cared for the land at the confluence of Turtle Creek and the Rock River.

Kečąk: We Once Lived Here | The Ho-Chunk At Ke-Chunk Village Program Series is supported by a grant from Visit Beloit.