In 1854 a group of 15 Irish families settled right here on the land at Nature At The Confluence. The recent Irish immigrants had come to build the new railroad, while their young wives strived to build a new home here. They called their small settlement “Illinoy”, and it was to grow to later become the city of South Beloit. At Nature At The Confluence, we are working to tell their story, and as part of Women’s History Month, we want to highlight the young Irish girls who immigrated to America and toiled so they could send money home. Learn more about the “Women Of The Confluence” in a program offered as part of our “Time Travelers” series. 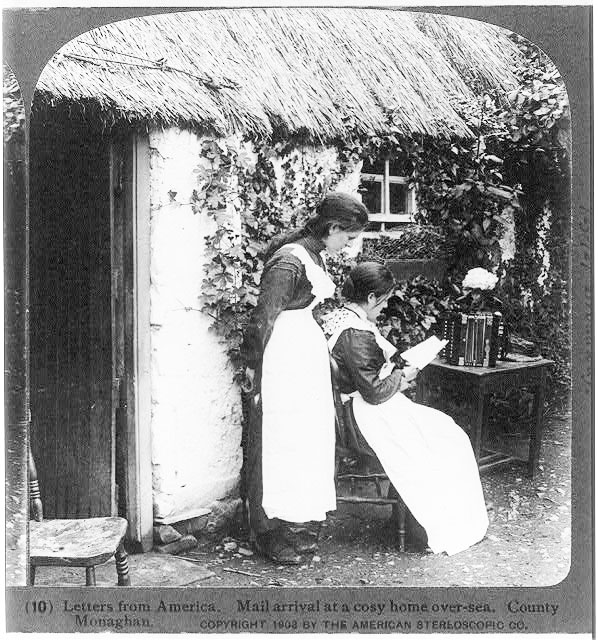 Throughout the long history of migration to the United States, the “American letter” sent back to the homeland played a crucial role in the lives of friends and family left behind, especially for the Irish. The letter home delivered news to loved ones, encouraged new migration through descriptions of the good life in America, and offered instruction on how immigrants might join those who had gone ahead. The American letter may also have contained cash, a bank draft or a prepaid ticket with a plea that a relation or friend follow the writer’s path to the new country.

Irish immigration to America peaked in the wake of the Great Famine that devastated Ireland starting with the failure of the potato crop in the autumn of 1845. Over the next ten years, more than two million Irish fled Ireland, with at least 60 percent of them going to America.

The most common job found by the Irish girls was as domestic help and while her wages were meager, less than $4.00 a week, her employer provided food, lodging, and a uniform, so her expenses were few. So, she sent what money she could in her letters home, thereby helping her family pay rent, buy food, or to help another to immigrate. We use the term “girls” because the majority of them were young and unmarried. In fact, only single young girls were hired for domestic service and according to their upbringing and traditions, they would not have called themselves “ladies”.

By 1854, the United States Postmaster General estimated that more than 2 million letters had been sent to Ireland and by 1874 the figure had climbed to more than 6 million per year! Those letters $8.7 million in 1854, that’s $284 million in today’s dollars. The Irish girl’s small contribution multiplied by all the other immigrants sending money home, became a mighty way to help the poor and starving people back home.