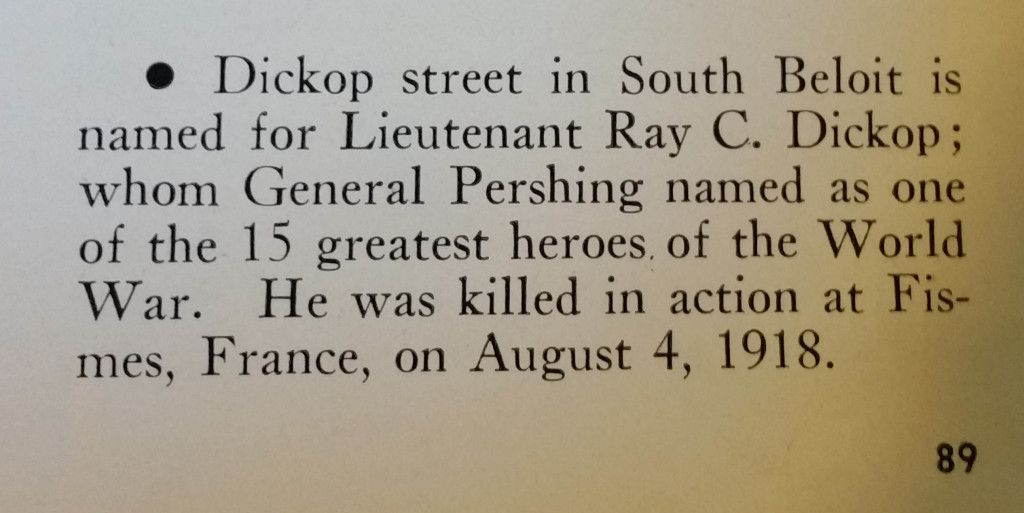 By Therese Oldenburg, executive director at Nature At The Confluence
Updated 5/28/2021

I recently found an small article in the 1936 Book of Beloit about the man that Dickop Street (the short street that leads into Nature At The Confluence) is name for. The article said Dickop St. is named for Lieutenant Ray C. Dickop; whom General Pershing named as one of the 15 greatest heroes of World War I. He was killed in action at Fismes France on August 4, 1918 along with other men from Beloit. The 1936 Book of Beloit was published by the Daily News Publishing Company (Beloit Daily News) “on the occasion of the 100th anniversary of the arrival of the first settlers at the junction of the Turtle and the Rock.”  That small little article in the Beloit Book lead me to do more research on Ray Dickop, the namesake of the street that Nature At The Confluence is located. 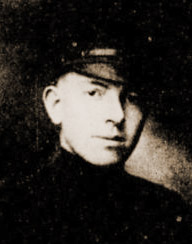 Census records show that Ray Dickop lived with his mother at 7 Maple Ave, South Beloit, IL on 1912. Old maps show the location of his home at 7 Maple St to be overlooking Turtle Creek near our new “Ho-chunk Ciporke” sculpture.  We invite you stop by and visit this pretty spot overlooking Turtle Creek and reflect on those who made the ultimate sacrifice for our country. Maple Avenue was renamed to Dickop Street after his death to commemorate this great national hero of World War I. His mother, Ada and his father John pre-deceased him. He also had an paternal aunt Hilda Schiller and cousin Lena Schiller who lived in West Bend, WI.  The Lt. Ray Dickop Post No. 36 of American Legion at West Bend, WI is named for him. Records show his estate was distributed among remaining relatives were uncles on his mother’s side, George, Charles, William Garber and a cousin Paul Garber. Perhaps relatives still live in the Beloit/South Beloit area.

I further found that Lt. Dickop posthumously received the The Distinguished Service Cross, which is the second highest military award that can be given to a member of the United States Army, for extreme gallantry and risk of life in actual combat with an armed enemy force. Six other Beloit men lost their lives in the same battles on August 4, 2018. Please click here to read a recent July 18, 2018 Beloit Daily News Article about commemorating 100 years of the men who lost their lives in this battle. 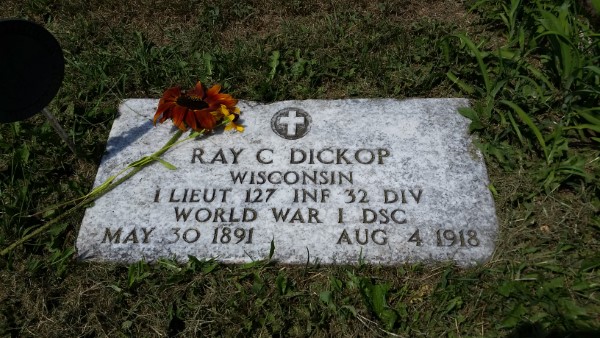 Dickop served for about 10 years in the Wisconsin National Guard, and was a non-commissioned officer in Company L from Beloit. He was in sole command of his company in all of the active fighting before his death. Please download an undated Beloit Daily News article about Dickop and his heroism.

” On April 6, 1917 America declared war on Germany. Three months later, on July 7, 1917, young Joe McKearn and many other men from Beloit and Rhinelander, joined Company L, 127th Infantry Regiment of the National Guard’s 32nd Division (Red Arrow Division). The Division, made up of men from Wisconsin and Michigan, trained in Wisconsin and Texas before shipping off for France on January 31, 1918 from Hoboken, NJ.
After arrival, and to the angry objection of the American Expeditionary Force commander, General John (Blackjack) Pershing, the 32nd Division was initially used as a replacement and labor division. The situation proved to be temporary.
On May 18, 1918 the 32nd was ordered to the front lines to relieve French troops position along an elaborate defensive trench network less than 20 miles from the French/Swiss border. In the six weeks that followed, the 32nd suffered 28 killed in action (KIA) AND 296 wounded. Compared to other unit casualties, that area of the war was considered a “quiet sector”.
On May 27, 1918, the Germans launched the 30 Division Aisne/Marne Offensive, aimed at reaching Paris and forcing an armistice before the American troops could tip the balance in the Allies favor. The attack advanced within 30 miles of Paris. The outlook appeared grim for the Allies.
By June, the American 2nd and 3rd Divisions joined the fight and helped turn back the German advance at the battle of Belleau Woods and later between 15 and 22nd July, with the help of seven American divisions, vicinity Chateau-Thierry, France. The German offensive was halted.
The Supreme Allied Commander, General Foch began planning for a counter offensive and Pershing pledged eight American Divisions, which included the 32nd. On July 19, 1918 the 32nd Division was on trains headed towards Paris and then the front lines at Chateau Thierry. The Germans, sensing their inferior positioned and weakened forces, began a systematic withdrawal on July 21, 1918.
On July 29, 1918, the 32nd Division, took over a 2-mile-wide sector. The Germans were fighting a determined rearguard action to cover the withdrawal towards Fismes and the Vesle River. Over the next six days of fierce fighting, the 32nd would advance sixteen miles and retake the town of Fismes, but at a tremendous cost of 578 men KIA.
Company L, along with Company I (Marinette and Superior, Wisconsin), lead the 127th Infantry Regiment assault on the rainy, muddy Sunday afternoon of August 4th. As the troops moved slowly forward, light danced briefly off the muzzle of a German machine gun. Corporal Joe McKearn peered through the haze trying to see what was on his left and right. Suddenly, enemy fire poured down on him and his squad, from their front and from both flanking ridges. They were caught in a terrible crossfire near the Chezelles farm. The field was littered with dead and wounded. It was August 4, 1918…the last day of Joe McKearn’s life…he was 23 years old.
All told, eight men from Beloit lost their lives that day, including the L Company Commander, First Lieutenant Ray Dickop (27 years old). Dickop was posthumously awarded the Distinguished Service Cross (DSC) for his leadership and heroism on the battlefield. Two other Beloit men, Private James Hix and Private Wilford Lloyd lived to receive their DSCs. The men of the 32nd were named Les Terribles by a French General for their courageous actions during those six days.”

I hope that Nature At The Confluence will be able to bring attention to Lt. Dickop’s great courage and sacrifice and help make the street that was named for him a shining focal point of our community and befitting of a hero.

“The President of the United States of America, authorized by Act of Congress, July 9, 1918, takes pride in presenting the Distinguished Service Cross (Posthumously) to First Lieutenant (Infantry) Ray C. Dickop, United States Army, for extraordinary heroism in action while serving with 127th Infantry Regiment, 32d Division, A.E.F., in the attack on Fismes, France, 4 August 1918. On reaching Chezelles Farm, First Lieutenant Dickop was shot in the head, body and legs. Although thus fatally wounded, when orders came for another assault, he gave the command “Charge” to his company and led the assault until he fell dead.” from http://valor.militarytimes.com/recipient.php?recipientid=11572

About the 32nd Infantry Division

The United States 32nd Infantry Division was formed from Army National Guard units from Wisconsin and Michigan and fought primarily during World War I and World War II. With roots as the Iron Brigade in the American Civil War, the division’s ancestral units came to be referred to as the Iron Jaw Division. During tough combat in France in World War I, it soon acquired from the French the nickname Les Terribles, referring to its fortitude in advancing over terrain others could not.  It was the first allied division to pierce the German Hindenburg Line of defense,  and the 32nd then adopted its shoulder patch; a line shot through with a red arrow, to signify its tenacity in piercing the enemy line. It then became known as the Red Arrow Division.

Learn more about the history of the 32nd Division: http://www.32nd-division.org/history/32hist.htm 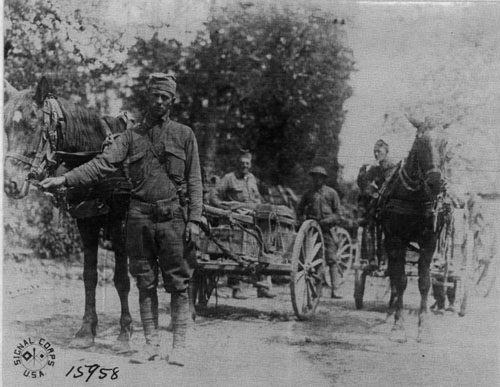